At the end of October, King 5 broadcast segments of an interview with Amanda Knox during their regular news reports. On November 5th, they ran a half hour special which was a mix of previously aired and un-aired footage. In each of these broadcasts, King 5 and their reporter Linda Byron frequently misreported on the case status and on the Italian court processes. In a follow-up email, a representative confirmed to me they made a deliberate decision to interpret the case in their own way! A copy of that email is in this post. Because King 5 deliberately decided to report on the Amanda Knox appeals in their own way, King 5 chose to withheld trial information from Seattle. The information that King 5 chose to withhold significantly alters the public’s perception on the case and on the fairness of the Italian court proceedings against Amanda Knox.

King 5 chose to report on the case as a “retrial”, which contradicts Knox’s own attorneys. Since the Supreme Court annulled the previous appellate court the case was sent back to the appellate level. The Florence appeals court is re-hearing the appeal of the original conviction.  This case status is confirmed in reporting from CNN.

Two of Knox’s attorneys, her primary lawyer in Italy and US lawyer Ted Simon, confirm the case is now at the appeals level.  Knox’s US attorney Ted Simon reiterated on CNN’s Shepard Smith show that the Italian Supreme Court sent the case back to the appellate level:

Knox’s Italian lawyer reported to the Toronto Sun in April 2013 that double jeopardy does not apply, since this is a continuation of the same case:

Dalla Vedova said [its] not be a new case but rather a continuation of the same case on appeal.
(Toronto Sun, 3/29/13)

Since April 2013 we have known the case is back at the appeals level to rehear Knox and Sollecito’s appeals for the original conviction of murder. This is not new information. The US news media refuses to tell their audiences the truth. 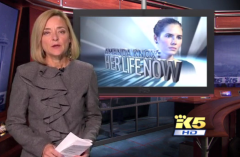 …and even as Italian prosecutors are back in court trying to convict her again.
(Linda Byron, “Amanda Knox: ‘This is where I feel safe'”, King 5, Oct 22 2013)

Following the presentation of this segment, on October 23rd I emailed King 5 to correct their reporting:

Italy is not trying to convict Amanda Knox “again;” after Amanda’s acquittal was overturned her original conviction remained in force. She is currently appealing her murder conviction. As responsible journalists, you should provide a correction to the erroneous information you published yesterday.

Much to my surprise, I received a response to my email. A bigger surprise was that a King 5 representative confirmed they knew Knox was appealing a conviction for murder, but they had decided to call it a retrial anyways.

The text of the email from a King 5 representative is as follows:

Thank you for your email about the Amanda Knox appeal.

It’s true that the trial underway now in Florence is an appeal of the previous conviction. But given how the appeals process played out in the first case and again now, we believe it’s fair to call this a retrial of Knox and Sollecito’s guilt or innocence.

Perhaps we can do a better job of explaining that in the online story – a clarification, rather than a correction.

There you have it: a King 5 representative confirms they know its an appeal of the conviction, yet decided to tell Seattle that it is a retrial anyways. A screenshot of the email is below.

As previously documented on this blog, King 5 Seattle continued to misrepresent the appeals process in their news segments.

By choosing to misreport on the appeals as a “retrial”, King 5 lays the groundwork to push another false claim later. On the second segment, King 5 lead-in reporter Lori Matsukawa reported:

“in Italy it’s perfectly legal to be convicted after being found innocent.” (Lori Matsukawa, Oct 23 2013, King 5) 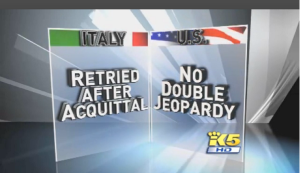 As documented above, King 5 already knew at this point that the Florence procedures are an appeal for a previous conviction. The Florence court will not convict Knox; as an appellate court they will either affirm or overturn the original 2009 conviction. Thus, King 5 knew that Matsukawa’s statement was false when it was broadcasted.

This did not stop King 5 from continuing to push the “double jeopardy” argument that is so popular with supporters of Amanda Knox. In their 4-part segment on November 3rd, King 5 published the image to the right. Their graphic implies that Italy does not have prohibitions against double jeopardy. King 5 not only contradicts Knox’s own lawyer on this matter, but they also contradict two international agreements that Italy has signed which prohibit double jeopardy: the European Convention on Human Rights and the International Covenant on Civil and Political Rights (UN). Interestingly, the United States is also party to the UN convenent!

King 5 deliberately decided to call the Florence process an “retrial”, even though they know its an appeal. Thus, their graphic is only makes sense through their own misinterpretation of the process, and is a completely inaccurate report on the Italian court proceedings.

Yes, it is true that acquittals can be overturned in Italy. This is true of other nations’ legal systems as well, including Canada and Mexico. And the United States has reportedly extradited people to both of those countries, despite defense arguments that this amounts to double jeopardy. The key point in the agreements listed above is that they discuss a final judgement, which in the case of Italy comes when the Supreme Court affirms the decisions of the lower courts. That has not yet happened in the trials of Raffaele Sollecito and Amanda Knox.