Yesterday, the annual Eurochocolate festival began in Perugia. The festival started in 1994, and occurs in the historic city center of Perugia, a very short walk from the house where the girls lived. It includes carvings out of chocolate and entertainment by local bands. According to Knox, she and Meredith went to this festival together one day:

Another afternoon, I returned to the festival with Meredith. I flipped the video switch on my camera and acted like a TV journalist. “Tell me, Meredith, what do you thing about being here at the Eurochoclate Festival. Meredith laughed and said, “no, no, don’t film me”.

The Netflix “documentary” apparently includes a snippet of this recording. The “Amanda Knox” filmmakers have stated that when they were given access to the case file, they came across a media card that still had items on it, so its likely this is how the footage got included in the film.

“[Meredith] was particularly enthusiastic about the nine-day Eurochocolate Festival, due to be held in October in the center of the city. Apparently it would stretch from Rocca Paolina to the Carducci Gardens, Piazza della Repubblica and Piazza IV Novembre. Later, after she had visited it, she told me that the vestival had been wonderful, with dozens of diferent chocolate stalls and incredible choclate sculptures that, towards the end of the festival, were broken up and pieces given to the public. She said that she brought me some of my favorites, which she would give to me when she returned home in November for ther mother’s birthday.

All of the photos and videos in this post are found on the internet and are from the festival in 2007.

The festival in 2007 included a playstation controller scupted in chocolate 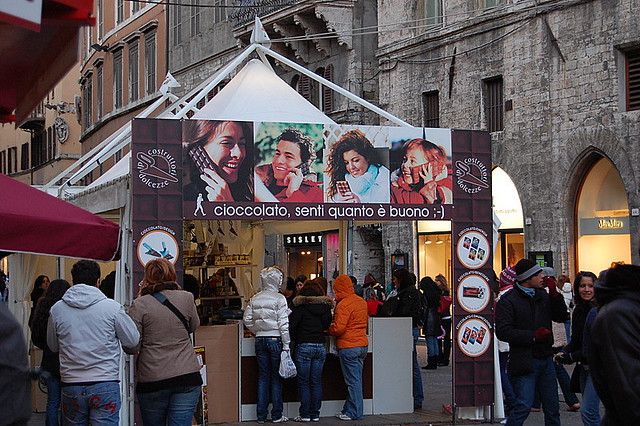 The Netflix film also includes footage of a “funk” band that appeared in 2007, that Meredith and Amanda may have watched. Here’s a longer clip of that band from 2007, although this is from a different part of the city center. The recording in the film was taken in Piazza IV Novembre, while the clip below is from Piazza Della Repubblica:

Another clip of the band walking through the street, likely taken the same day as the clip in the Netflix documentary, judging by the red sweatshirt one player is wearing and the red sleeves of another player.

The festival also included live sculpting of a block of chocolate; in Waiting to be Heard, Amanda writes:

Laura told me about the chocolate sculpture carving. It was done in the early mornings, so the next day I went to Piazza IV Novembre to watch. The artists started with a refrigerator size block of chocolate. As the chiseled pieces flew, assistants gathered chips and shavings into small plastic bags and threw them to the rowdy crowd.

Meredith never got to deliver the chocolate to her mother. Rest in peace, Meredith.