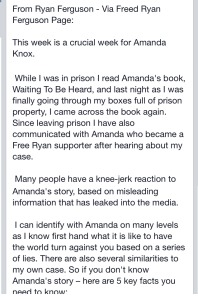 The US recently released Ryan Ferguson, who had been in prison for a decade for the murder of Kent Heitholt. Ferguson and his supporters claim he was “wrongfully convicted” (a term that these days seems to only mean “someone who has amassed a vocal following”). Ferguson’s supporters say that he was found innocent, which isn’t quite accurate. Ferguson was released when an appellate panel declared he did not receive a fair trial, and overturned the conviction. The attorney general could have decided to prosecute again, but has not at this time (Huffington Post, Nov 2013).

Ferguson claims to have read Knox’s book while in prison. He recently posted about the case against Knox and Sollecito on a Facebook page for his supporters. Ferguson claims that the media got the case about him wrong and tries to pass along information about the case against Knox and Sollecito. Ferguson, however, pushes information about Knox’s case that has been proven to be misleading or false. Below are quotes from his message and the corrections to Ferguson’s information.

END_OF_DOCUMENT_TOKEN_TO_BE_REPLACED

Guede’s diary from Germany:
“I am asking myself how is it possible that Amanda could have slept in all that mess, and took a shower with all that blood in the bathroom and corridor?”

Rudy Guede was convicted in 2010 of participating in the 2007 murder of Meredith Kercher. The prosecution claims the two other participants are Amanda Knox and Raffaele Sollecito. Knox and Sollecito are currently appealing their conviction of the same crime. The case against the three of them involves a suspected clean up of the hallway in the apartment after the crime. Meredith’s blood was found in the bathroom, and half a footprint in her blood was found on the bathroom mat. However, there was no visible blood between Meredith’s bedroom and the bathroom. The only visible blood in the hallway were faint partial shoe prints that led directly out the front door of the apartment.

After the murder was discovered, the media reported almost daily on developments in the case. The day of the murder, the press reported on the blood found in the bathroom and the bedroom. But until police used luminol at the apartment on December 18th, the media didn’t report on any significant blood found in the hallway.  Between November 2nd and December 18th, only one person stated that significant amounts of blood had been in the hallway; Rudy Guede. And he wrote about it in his diary between Nov 20th and Dec 6th, after being captured in Germany.

The police arrived at the apartment on November 2nd. According to media reports, the blood they was only in the bathroom and Meredith’s bedroom.  When the scene was later examined after the discovery of the body, police found visible blood patterns on the floor left by Guede’s left shoe as he left the apartment. None of the people who arrived in the apartment on the afternoon of November 2nd reported seeing them; these footprints are not in any of the stories of the events of Nov 2nd told by Amanda Knox nor Raffaele Sollecito. So, while these prints were visible, they were not substantially obvious. 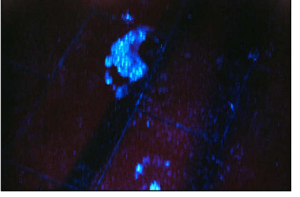 On December 18th 2007 investigators applied Luminol in the hallway and other bedrooms. This forensic chemical is used to detect blood which has been cleaned away. The Luminol revealed several footprints in the hallway between the bedrooms of Knox and Meredith. Some of these footprints were leading towards Meredith’s door. They also discovered prints in Filomena’s room which contained Meredith’s DNA and Amanda Knox’s DNA. They also revealed a footprint in Amanda Knox’s bedroom. (The defense unsuccessfully contested the investigator’s conclusions that these prints were made with blood).

END_OF_DOCUMENT_TOKEN_TO_BE_REPLACED

According to one Knox’s supporters, repeatability is one of the measures of good science. Repeatability means if you repeat an experiment *under the same conditions*, it  will lead to the same result. If the conditions are not the same, then repeatability is not relevant. Here, then, are ways in which Channel 5 fails at repeating (recreating) elements leading to the murder of Meredith Kercher.

Below is an analysis of the window climbing demonstration.

END_OF_DOCUMENT_TOKEN_TO_BE_REPLACED

The Massei report for the trial of Amanda Knox and Raffaele Sollecito examined the evidence from the the room with the broken window, and concludes that the broken window and room in disarray are an “artificial representation”, i.e. that the break-in was staged. After seven pages of review of the evidence (english translation*), the report states:

“…the situation of disorder in Romanelli’s room and the breaking of the window pane constitute an artificial representation created in order to orient the investigations towards a person who, not having the key to the front door, was supposed to have entered through the previously broken window and then effected the violent acts on Meredith which caused her death.”

What follows is a look at the comments in the Massei report compared with crime scene and other photos. All quotes are from the english translation prepared by unpaid volunteers at PerugiaMurderFile.org.* The section on the scenes in the bedroom begins on page 47 and continues to page 55. Some sentences in the paragraphs below have been omitted for brevity, and are included as footnotes with the notation (…#).

END_OF_DOCUMENT_TOKEN_TO_BE_REPLACED

Once one or more parties to the trial requests an appeal, within 15 days from the day such Motivation report is communicated, the competent court will then acquire all the documentation regarding the case. The court will then notifies all parties of the beginning of the hearing at least 20 days before the commencement day.

As mentioned above, the appeal process in Italy is a brand new trial where all evidence and testimony is analyzed in the same terms as the first trial. The standards are however higher. The president of the Appeal Court of Assizes is in fact a judge from the Supreme Court of Cassation (the members of the Supreme Court are actually called “Consiglieri”). The requisites for being one of the 6 jurors are also higher. They must be all holding a high school degree (in the first trial the minimum required is only a middle school education).

Prosecutors were disappointed with the court’s reasoning for lesser sentences, including the discount for extenuating circumstances and the fact that the jury questioned the motives for the murder as laid out in their case. However the move is likely more strategic than it is specific, as it opens up a route for prosecutors to remake their case during the appeals trial. Now, both sides will have to present their points at the same time before the appeals court, which is presided over by Judge Emanuele Medoro. Medoro will appoint a lateral judge who will work alongside him on the case, likely to begin after the summer recess.

This snippet of the appeals status from Seattle’s KOMO News:

Knox’s 220-page appeal, filed with the of Court of Appeals in Perugia on Saturday morning, is a total repudiation of all the points of the sentence, said Knox’s lawyer, Luciano Ghirga from Perugia in an interview with the Seattlepi.com.

“It includes the first days of the interrogation, the DNA and the traces detected with luminol. We reiterate the innocence of Amanda and remain convinced there is not proof of her presence at the scene of the crime,” Ghirga said.

The problem is, this last statement is erroneous. Supporters of Knox want to limit “the crime scene” to be just the victim’s bedroom, when in fact the whole apartment was cordoned off as a crime scene.  There are over 400 mentions of DNA in the Motivations document written for the conviction of Knox & Sollectio. There were multiple drops of combined Knox DNA & victim’s blood throughout the apartment. One of these instances was in the room where the alleged break-in happened, which is not the bedroom of either Amanda nor the victim. It would be highly unlikely that the victim’s blood would be mixed with Amanda’s DNA in another roommate’s bedroom- and not mixed with the resident of that room. It is evidence like this that supporters of Knox want to downplay.

Knox’s lawyers werent the only ones to file an appeal this week. Prosecutors also filed their own appeals requests seeking to increase the sentences to life in prison as originally requested.
http://www.seattlepi.com/local/418627_knox17.html

There is also a document that is claimed to be the appeals filing for Amanda (in italian).